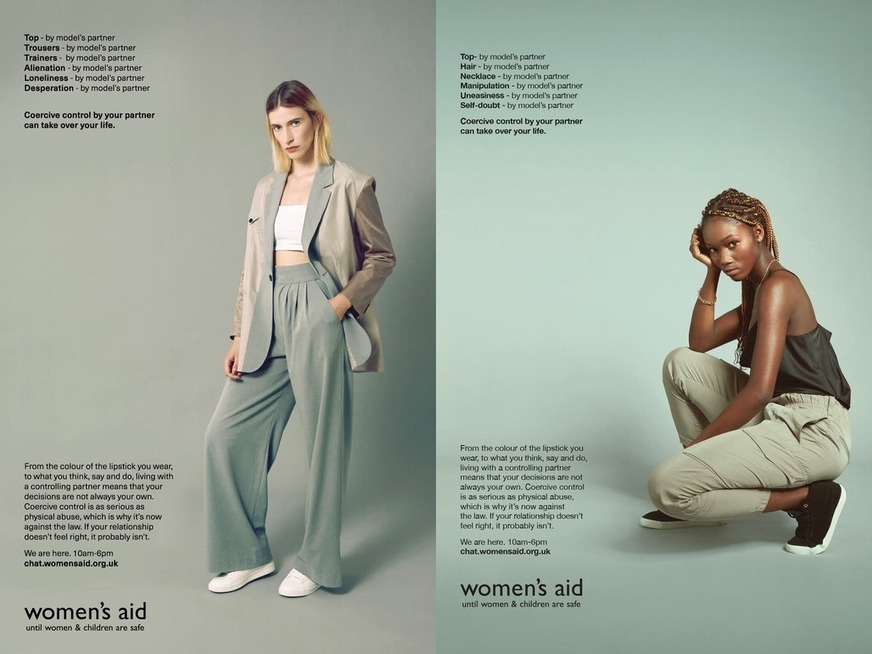 Women’s Aid recently launched a new campaign to highlight coercive control, raising awareness and encouraging people to have conversations about this form of domestic abuse.

The campaign called Not Model’s Own shows women posing for a fashion photoshoot, but the credits have been used to highlight the impact of coercive control.

What the Campaign Hopes to Achieve

The campaign is aiming to raise awareness of coercive control, a form of domestic abuse that is not always immediately visible, providing an example of how this may present itself.

Perpetrators will try to control every aspect of their partner’s life, potentially including the clothes and make-up they wear, as depicted by the campaign poster.

Coercive control is not fully understood, and many people may excuse their partner telling them what to wear as the partner caring about them.

As the campaign points out though, this is not normal behaviour and Women’s Aid are hoping to reach out to those experiencing this type of thing in their relationship.

What is Coercive Control?

Coercive control became an offence in 2015 under the Serious Crime Act, following campaigning from Women’s Aid and other organisations.

It is a pattern of behaviour that makes a victim dependent on the perpetrator, isolating them from support networks (family and friends), as well as controlling aspects of their everyday life – such as what they wear and what they do.

The Domestic Abuse Act will include a definition which covers coercive control and the other forms of domestic abuse. This is a great step forward in ensuring that all types of domestic abuse are understood and are legally defined.

Despite the fact coercive control has been an offence since 2015, it is still not fully understood and many people will be experiencing it without realising.

At Leeway, we deliver regular Domestic Abuse Awareness sessions that cover all forms of domestic abuse, including coercive control.

These are designed to increase people’s knowledge of domestic abuse and help them to be able to confidently signpost family, friends, or colleagues to access support, if they need it.

Throughout the pandemic, our training has been delivered online and has been delivered to a variety of businesses, organisations, and individuals. Leeway also supports businesses and organisations to put policies and procedures in place, ensuring that they are providing the best possible workplace support for employees experiencing domestic abuse.

To find out more about Leeway’s training, visit our Training Page or email admin@leewaynwa.org.uk