You are here: Blog Home | The Role of the Domestic Abuse Commissioner

The Role of the Domestic Abuse Commissioner 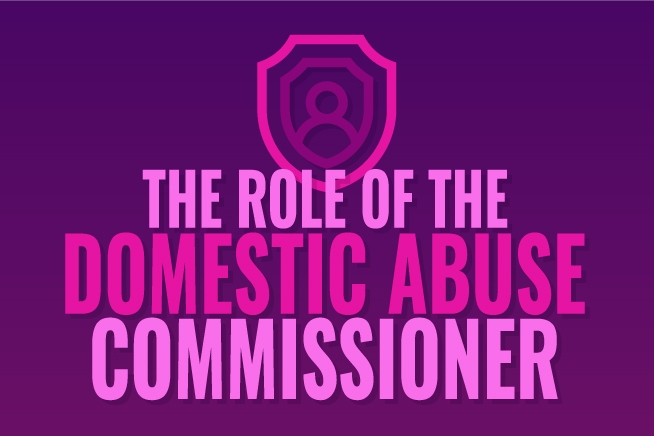 You may have seen some content about the recently passed Domestic Abuse Bill on our social media channels and blogs in the past few weeks. In the latest part of our look at the new Domestic Abuse Act, we highlight the role of the Domestic Abuse Commissioner and what the role sets out to achieve.

Background to the Commissioner Role

This was the first part of the Domestic Abuse Bill to come into force, with Nicole Jacobs officially appointed as the Commissioner in September 2019. Nicole has over 20 yearsâ€™ experience working as a frontline worker and also in domestic abuse policy and intervention. Her work as Commissioner is supported by teams dedicated to Policy, Research, as well as Practice and Partnerships.

The Policy team will work to ensure that there is a robust and effective response to domestic abuse at a national level and a local level too, whilst the Research team will help to collect an evidence base to form decisions at local and national levels.

The Practice and Partnerships team is split into regional leads that will develop networks to understand the challenges facing organisations in their areas.

All the teams will work in harmony to ensure that the response to domestic abuse is consistent across the country and that the needs of survivors are prioritised.

Powers of the Commissioner

The Commissioner is an independent voice that speaks on behalf of victims and survivors. They have statutory powers to raise public awareness and hold both agencies and government to account in tackling domestic abuse.

The Domestic Abuse Act places a statutory duty on organisations and bodies to cooperate and to respond to any recommendations that are made to them within 56 days.

It is hoped that this will enable the Commissioner to drive forward change, ensuring a consistent response to domestic abuse across the country and that there are services available to all.

Will it be a success?

The early signs have been positive and the Commissioner has used her voice to highlight some key issues that survivors are facing. Once the various policies set out in the Domestic Abuse Act start to be implemented, the Commissioner and her teams will be working to ensure that this is effective and flag up any issues.

The role will also be reviewed every three years by the government, whilst the Commissioner will be developing a strategy that is expected to be published later this year. The strategy will draw upon the expertise of specialist organisations, putting the voice of survivors at the heart of the strategy which will lay out plans for the next three years.

We feel that this is a really important role and will help to ensure that the voices and needs of survivors are heard by government and decision makers at local levels.