You are here: Blog Home | Leeway Make an Impact with Domestic Abuse Training

Since May 2014 our Domestic Abuse Trainer, Ian Fox, has delivered over 100 training sessions to more than 1500 health professionals. This is due to Leeway being commissioned to deliver one hour sessions to every GP surgery in Norfolk as well as creating a short video to compliment the training. The reason for the comprehensive training sessions was because of two domestic murders that occurred during 2013 which were made subject of a Statutory Domestic Homicide Review (SDHR).

SDHR's are multi-agency reviews which can be instigated when someone is murdered, the victim of manslaughter or suicide as a result of domestic abuse. Reviewing officers will "go back in time" and work along the journey towards the point of death to establish the agency contacts that had occurred between the victim, perpetrator or children and highlight the problems that were encountered or improvements to services that need to be made.

At the end of the SDHR report follows recommendations – the two 2013 reviews from Norfolk recommended that all GP surgeries in Norfolk receive Domestic Abuse Awareness training. The training is designed for all staff, clinical and non-clinical, who works in the surgery.

Has the training worked?

Ian Fox said: "I have been in the specialist field of Domestic Abuse for more than 12 years and this is without a doubt the most rewarding initiative with which I have been involved."

The charts below show the services the patients received and their initial reason for visiting the GP surgery during 1st January-31st March 2015: 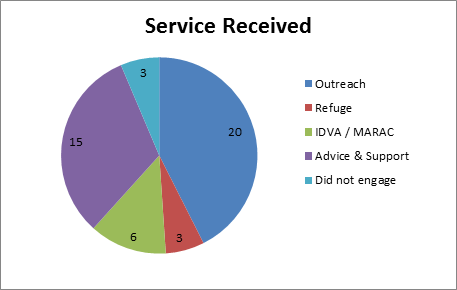 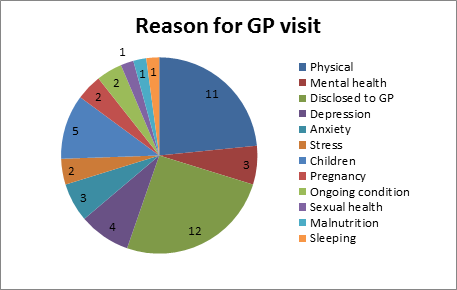 These results demonstrate that GP surgeries:

"Didn't know there were so many types of abuse"
"Brilliant insight, some useful stimuli for recognition in surgery"
"Superb – hard hitting. Very good speaker"