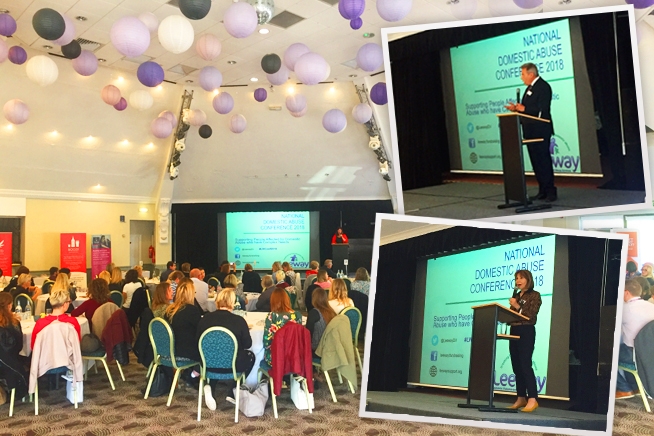 The Leeway Annual Conference is a chance to shine a light on and discuss the serious issues that people who experience domestic abuse must face. We held our 2018 Conference at the Airport Holiday Inn, Norwich, on Wednesday 3rd October. Over 120 people from a range of organisations attended. The theme for the day was “Supporting people experiencing domestic abuse who have complex needs.” A variety of speakers provided an insight on these issues.

Following a welcome from Emma Corlett, a member of the Leeway Management Committee, the Police and Crime Commissioner for Norfolk, Lorne Green, opened the conference.

We would like to thank all our guest speakers for giving up their time to speak at our conference. They provided an excellent insight into important subject areas and all the talks and presentations were very thought-provoking.

Thank you to all our attendees – we hope you had an enjoyable day.

We put evaluation forms in our delegate packs and we’d like to thank the people that took the time to fill these in. We received some excellent feedback which will help us to shape future events.

We have two big fundraising events still to come this year. Tickets are available for the Hollywood Glitz Charity Ball, taking place on the 24th November. And our ever-popular Sparkling Winter Quiz is being hosted in the Cottage on Thunder Lane on the 13th December. We hope to see as many of you as possible at these events!