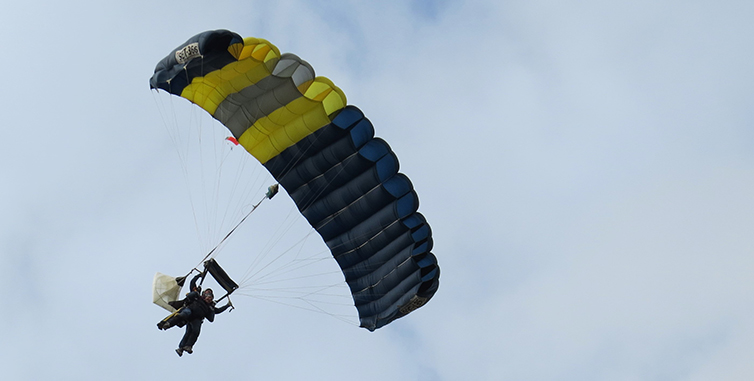 The weather may have been a little cloudier than we’d hoped for, but we are delighted to announce that our first ever charity skydive event has been a fantastic triumph! Held at Beccles Airfield on Sunday 20th March, the event saw 22 brave individuals make the jump for Leeway and help us to raise a considerable amount of money in the process.

It was an early start to the day (especially for a Sunday!) with jumps taking place throughout the morning from 8:30am onwards. Upon arrival, each participant was kitted out in their skydiving gear and received a full briefing on what to expect during the jump.

In addition to our Fundraising and Events Officer, Daisy, we were thrilled to have the support of:

On the day there was great support from family and friends, with each skydiver receiving a glass of bubbly and a certificate once they had completed their jump. Despite a few nerves beforehand, it was great to hear such positive feedback about the event - with many people saying how much they enjoyed it and would love to do another one.

“Domestic abuse will affect 1 in 3 woman and 1 in 5 men in their lifetime. Leeway charity offers our community a unique specialised confidential service and it’s incredibly important to support the delivery of these services. We’re extremely proud to have raised £1,750 for Leeway Domestic Abuse Services.”

“The support for the skydive has been amazing.  A total of 22 people  joined in and alongside the staff from Clapham & Collinge we had 8 people from the Queen’s Dragoon Guards based at Swanton Morley as well as Leeway supporters, volunteers and staff and we are so grateful for everyone’s support.  The demand for Leeway’s services is growing each year and money raised from events such as this helps us to continue to support people who need our help”

There are so many people that we would like to thank for taking the time to support this event. We offer a massive congratulations and thank you everyone who was brave enough to jump for Leeway, as well as all the friends and family who came to support them on the day. We would also like to thank the team at UK Parachuting for helping to deliver such a fantastic experience to all those who took part and without whom the event would not have been possible.

Our next fundraising event will be our charity golf day at Sprowston Manor Marriott Hotel & Country Club on Thursday 28th April. If you would like to get involved, you can find full details by clicking here.