You are here: Blog Home | Coercive Behaviour Legislation: What Does It Cover?

Coercive Behaviour Legislation: What Does It Cover? 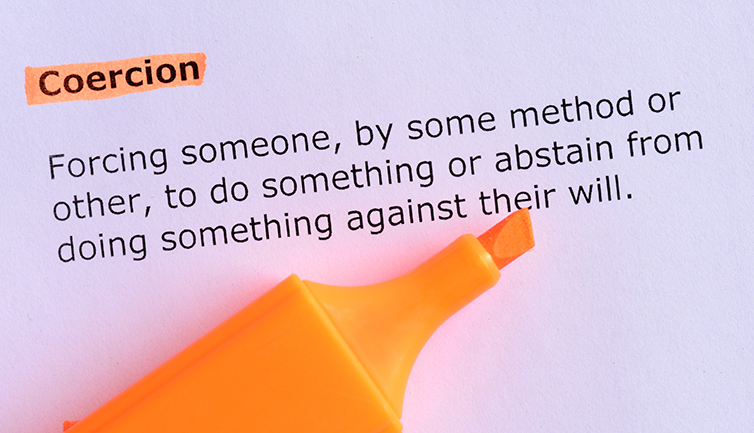 After a short break for the Christmas and new year celebrations, it is great to be back in the office. We wanted to begin our first post of 2016 by taking this opportunity to thank everyone who so kindly donated gifts, hampers and food in the run up to Christmas. We were blown away by your generosity and it certainly helped to put smiles on the faces of the women and children using our refuges during the festive period.

Whilst tucking into your mince pies and leftover turkey, you may have heard the news that new legislation came into force last week focussing specifically on psychological and emotional abuse. The law, which comes under the Serious Crime Bill, carries a sentence of up to five years in jail, a hefty fine, or both for those who repeatedly subject partners, spouses or family members to controlling or coercive behaviour.

One Form of Domestic Abuse

Many people wrongly perceive domestic abuse to only take the form of violence but, as the director of prosecutions, Alison Saunders, said in an interview with the BBC, controlling and coercive behaviour is just one way a perpetrator can build control.

â€œControlling or coercive behaviour can limit victimsâ€™ basic human rights, such as their freedom of movement and their independence. This behaviour can be incredibly harmful in an abusive relationship where one person holds more power than the other, even if on the face of it this behaviour might seem playful, innocuous or loving.

These new powers mean this behaviour, which is particularly relevant to cases of domestic abuse, can now be prosecuted in its own right.â€

Examples of controlling or coercive behaviour can include, but are not limited to:

Perpetrators can be charged with the new offence where it can be proven that there has been repeated or continuous abuse and that it has had a serious effect on the person being abused. Each incident will be judged on a case-by-case basis, with the evidence required to demonstrate a pattern of behaviour as opposed to a set number of isolated incidents.

If you are experiencing domestic abuse or know someone who is, you can get confidential advice on what to do next by calling our helpline â€“ 0300 561 0077. This is a completely free number, available between 9am and 8pm Monday to Friday. Calls made outside of this period will be diverted to our trained out of hours workers.