The 14th July 2015 marked the first ever annual Memorial Day to remember victims of honour killings and the birthday of Shafilea Ahmed who lost her life in 2003 aged 17. After years of honour-based violence, including an attempted forced marriage, Shafilea's parents suffocated her to death.

An estimated 5,000 women across the world are killed every year for bringing 'shame' upon their families, so Karma Nirvana, a charity supporting victims of honour crimes and forced marriages, teamed up with Cosmopolitan Magazine to form the 'Britain's Lost Women' campaign.

In conjunction with the campaign a petition was created in 2014 encouraging people to pledge their support for an annual memorial day – over 100,000 signatures were secured as well as the support from three main political parties, including Home Secretary, Theresa May:

The idea behind the campaign is to raise awareness of honour-based crimes and forced marriages and finally put an end to it. Hundreds of people showed their support on the first ever Annual Day of Memory via Twitter:

Jasvinder Sanghera CBE, founder of Karma Nirvana said: "Girls and women can be murdered for the most basic freedoms – the right to education, independence or wanting to choose their partner.

"A day of memory will honour these women and dishonour the crime. It will also raise awareness so anyone can spot this abuse and potentially save someone's life."

The Annual Day of Memory was a great success and to remember Shafilea's memory, as well as the other 141 women and girls who have lost their lives to 'honour' violence since her death, a memorial has been created. Thousands of tweets in support to the memorial have enabled a 3D printer to build the sculpture to ensure her memory lives on and that the victims of honour killings are never forgotten. To watch the memorial being made, visit Karma Nirvana's website here. 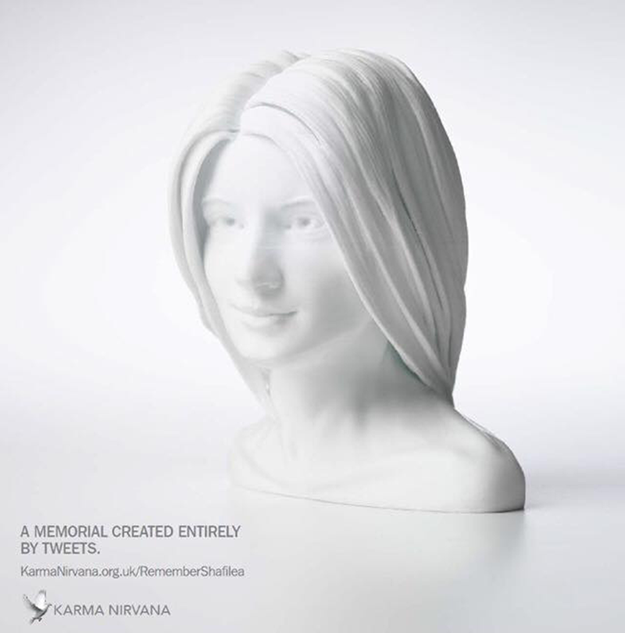